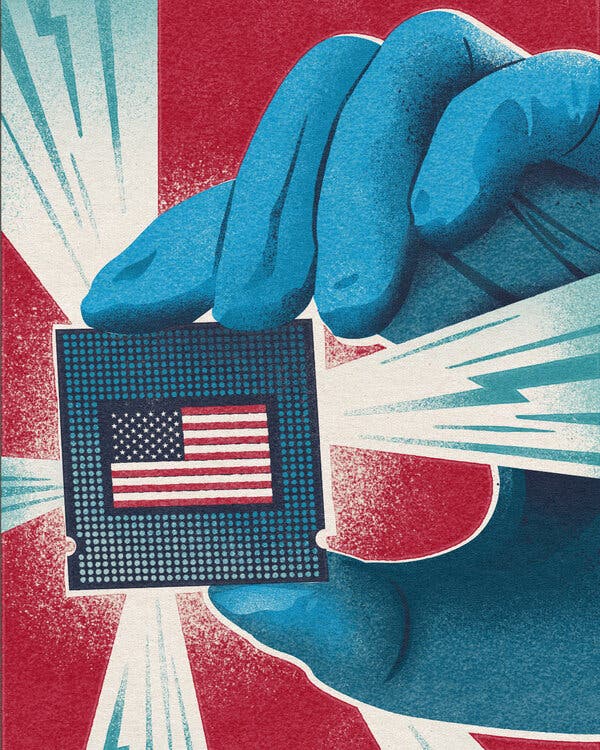 Vast U.S. investments may not be a panacea for the chip industry

The Biden administration has led a colossal ramp-up in U.S. chip-making efforts over the past 18 months, the scale of which has been likened to Cold War-era investments in the space race.

The boom has implications for global technological leadership and geopolitics, with the U.S. aiming to prevent China from becoming an advanced power in chips, the slices of silicon that are vital in electronics from smartphones to smart missiles.

About 22 percent of all chips and more than 90 percent of the most advanced chips are made in Taiwan, the island to which China claims territorial rights. That has caused fears that semiconductor supply chains may be disrupted in the event of a conflict, leaving the U.S. at a technological disadvantage.

The new U.S. production efforts may correct some of these imbalances, industry executives say — but only up to a point. One study suggested that $50 billion in investment would take the U.S. share of global production to as much as 14 percent by 2030.

Numbers: The Biden administration is dangling at least $76 billion in subsidies to encourage domestic chip production. More than 35 companies have pledged nearly $200 billion for manufacturing projects related to chips since the spring of 2020, according to a trade group.

Challenges: The new factories would take years to build, and might not immediately be able to manufacture the most complex chips. Companies could delay or cancel projects if they don’t receive sufficient subsidies. And a severe shortage of engineers and technicians could undercut the boom.

Related: American companies like Walmart are shifting business to Mexico from China to lessen the risks of the global supply chain.

Multiple rocket launchers at a ceremony in Pyongyang.Credit…Korean Central News Agency, via Reuters

Kim, who spoke at a five-day meeting of the ruling Workers’ Party, framed the escalation as a response to a harder line on the North by Yoon Suk Yeol, South Korea’s new conservative president.

Background: North Korea launched more than 90 missiles in 2022, its highest annual total to date, and broke its self-imposed moratorium on ICBM tests. It tested yet another missile early on New Year’s Day.

Context: North Korea’s economy has been ravaged by the pandemic and sanctions, Kim has warned of food shortages caused by flooding and the value of the North Korean currency has plummeted against the dollar. Analysts say Kim seems to see his nuclear arsenal as the most effective means of elevating his leadership credentials among his people.

A hotel hit by a Russian strike on Saturday in Kyiv, Ukraine’s capital.Credit…Laura Boushnak for The New York Times

Russia rained missiles and exploding drones on Kyiv and other Ukrainian cities in a deadly New Year’s Eve assault, hours before President Volodymyr Zelensky was set to deliver a much-anticipated speech to Ukraine.

The explosions did not stop Zelensky. He used the address to reinforce the story line of Ukrainian resilience against unfounded Russian aggression that he has presented to audiences at home and abroad since Russia invaded.

In Russia, which has lost much of the territory it occupied and suffered military defeats against Ukraine’s far-smaller military, President Vladimir Putin called the war “a sacred duty to our ancestors and descendants” in his own New Year’s address. (Some of Putin’s critics sent their own New Year’s messages from jail.)

Quotable: “This year began on Feb. 24,” Zelensky said, the date Russia first invaded Ukraine. “It can still be dark, loud and complicated for us. But we will definitely never be afraid again.”

Other war news: A Russian soldier went on a rampage in Bucha hours before Russian troops withdrew from the Ukrainian suburb.

China: Putin met with Xi Jinping, China’s top leader, in a video call on Friday. China accounted for more than a quarter of Russia’s total imports in the first nine months of 2022.

Benedict at Castel Gandolfo, south of Rome, in February 2013.Credit…Osservatore Romano, via Reuters

The death on Saturday morning of Pope Emeritus Benedict XIV, the first pontiff in nearly 600 years to retire, has created an odd moment for the Catholic Church. Pope Francis is set to preside over his predecessor’s funeral, but no one is quite sure what a funeral for a pope emeritus will look like.

Barbara Walters, the first woman to co-anchor a network newscast and one of television’s foremost interviewers, died at 93. Here is an appraisal of her accomplishments, a roundup of reactions to her death and memorable moments from her career.

A new year, with low expectations

Not long before Christmas, Erin Monroe posted a video on TikTok suggesting a different approach to the new year. “I don’t need 2023 to be my year,” she said. “I need it to not be a soul-sucking drag through earthly purgatory.”

The message struck a chord. Within two days, the video had 1.8 million views and thousands of comments.

Sure, many people are still heading into the new year with great excitement. But after yet another tumultuous year, some Americans are opting to keep their expectations for 2023 in check.

A recent survey conducted by Ipsos found that only 65 percent of respondents reported feeling optimistic that 2023 would be better than 2022, compared with 77 percent last year.

Jacob McCleery, a 28-year-old from South Bend, Ind., said “it’s a little pessimistic, but let’s let this year be what it is and be OK with the results.”

He added, “We need to protect ourselves a little bit so we don’t get disappointed.”

V.V. Ganeshananthan’s novel “Brotherless Night” is about the ugly little human complexities words like “terrorist” are designed to obliterate, our reviewer writes.

Here are the Wordle and the Spelling Bee.

You can find all our puzzles here.

P.S. The word “meyasubako,” meaning a petition box in Japan under the shogun, appeared for the first time yesterday in The Times in an article about taking suggestions.

Here’s Friday’s edition of “The Daily,” an update on a young man who fled Putin’s draft.

You can reach Dan and the team at briefing@nytimes.com.

Tags
New Russia That With Year