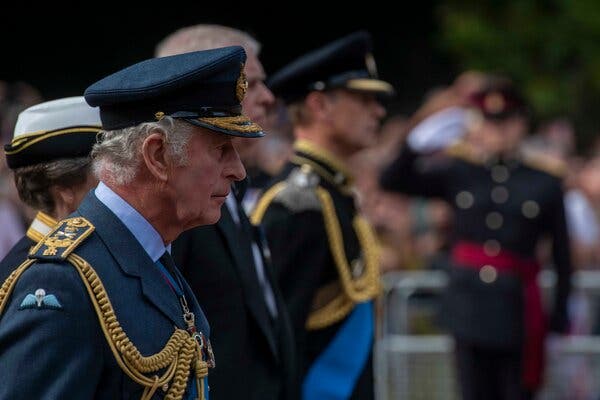 There have been a few hiccups and moments of confusion. Some new Canadians stumbled over which monarch to name when swearing their oaths of allegiance at the first citizenship ceremonies after the queen’s death. And in its haste to switch the lyrics of Canada’s royal anthem — now “God Save the King,” formerly “God Save the Queen” — the federal heritage department missed a few female pronouns in the last verse. (It has since been corrected.)

The king’s accession to the throne was proclaimed in Canada during a ceremony at Rideau Hall in Ottawa on Sept. 10. Protocol will dictate the activities to come, such as taking down Queen Elizabeth’s portrait in government buildings and adding King Charles’s image to Canadian money and documents.

Ahead of the queen’s funeral on Monday, here are some answers about what comes next for Canada.

What does Queen Elizabeth’s death mean for Canada?

Queen Elizabeth’s death may inspire more discussion about the relevance of the crown in Canada, but materially, it’s business as usual.

“The system didn’t change; regardless of the people — the celebrities — at the top, the basic system is still there, and it’s the same as it was last week,” said Jonathan Malloy, a political science professor at Carleton University in Ottawa.

While countries like Barbados cast off the queen as head of state, and Prime Minister Jacinda Ardern of New Zealand recently reaffirmed her support for her country to eventually become a republic, that conversation is not as far along in Canada.

Replacing the monarch with a Canadian head of state is complicated.

Queen Elizabeth’s Royal Cypher was projected on the Peace Tower in Ottawa, after her death on Sept. 8.Credit…Patrick Doyle/Reuters

To do so would require amending Canada’s Constitution with the unanimous consent of the federal government and all 10 provinces, as my colleague Ian Austen wrote during the last royal visit — made by the king, who was then a prince, and Camilla, in May.

“The crown underlies our entire parliamentary, judicial and state system,” Mr. Malloy told me, adding that it wouldn’t be as simple as replacing the crown’s representative in Canada, the governor general, with a Canadian president, for example. The crown’s treaties with Indigenous people and Canada’s federalist system, which considers the provinces as an equal order of government to the federal government, would be affected.

A historic visit. On May 18, 1965, Elizabeth arrived in Bonn on the first state visit by a British monarch to Germany in more than 50 years. The trip formally sealed the reconciliation between the two nations following the world wars.

First grandchild. In 1977, the queen stepped into the role of grandmother for the first time, after Princess Anne gave birth to a son, Peter. Elizabeth’s four children have given her a total of eight grandchildren, who have been followed by several great-grandchildren.

Princess Diana’s death. In a rare televised broadcast ahead of Diana’s funeral in 1997, Queen Elizabeth remembered the Princess of Wales, who died in a car crash in Paris at age 36, as “an exceptional and gifted human being.”

Golden jubilee. In 2002, celebrations to mark Elizabeth II’s 50 years as queen culminated in a star-studded concert at Buckingham Palace in the presence of 12,000 cheering guests, with an estimated one million more watching on giant screens set up around London.

A trip to Ireland. In May 2011, the queen visited the Irish Republic, whose troubled relationship with the British monarchy spanned centuries. The trip, infused with powerful symbols of reconciliation, is considered one of the most politically freighted trips of Elizabeth’s reign.

Breaking a record. As of 5:30 p.m. British time on Sept. 9, 2015, Elizabeth II became Britain’s longest-reigning monarch, surpassing Queen Victoria, her great-great-grandmother. Elizabeth was 89 at the time, and had ruled for 23,226 days, 16 hours and about 30 minutes.

Marking 70 years of marriage. On Nov. 20, 2017, the queen and Prince Philip celebrated their 70th anniversary, becoming the longest-married couple in royal history. The two wed in 1947, as the country and the world was still reeling from the atrocities of World War II.

Losing her spouse. In 2021, Queen Elizabeth II bade farewell to Prince Philip, who died on April 9. An image of the queen grieving alone at the funeral amid coronavirus restrictions struck a chord with viewers at home following the event.

Citizens for a Canadian Republic, one of the main groups pushing for this change, is not seizing on the queen’s death to argue for its ideas.

“There will be many occasions for making our case for a republic,” it said in a statement. “This is not one of them.”

How do Canadians feel about the monarchy and King Charles?

During the last royal visit, I spoke to John Fraser, the founder and president of the Institute for the Study of the Crown in Canada.

At the time, he described a small minority of Canadians as “die-hard” fans of the royals and “romantic monarchists who see that the crown is like a golden thread woven through our history.”

Overwhelmingly, though, Canadians are indifferent to the institution and to the accession of King Charles, according to a recent poll.

“Support for the queen runs higher than support for the monarchy, because she was a remarkable person,” said Peter Loewen, director of the Munk School of Global Affairs and Public Policy at the University of Toronto.

He’s skeptical that King Charles can earn the same authority that his mother had in Canada, and said the accession of Queen Elizabeth’s less-liked son will not realistically lead to a meaningful push for Canada to amend its Constitution to become a republic.

“The costs of us changing our system of governance in a way that would effectively make us a republic are just so high, because they would involve opening up all sorts of issues that the country has tried to settle or ignore,” Mr. Loewen said. “We’ll kind of muddle through with Charles.”

When is Queen Elizabeth’s funeral?

The queen’s coffin will be moved to Westminster Abbey on Monday for her funeral after four days of lying in state at Westminster Hall, where thousands of visitors lined up for hours to pay their respects.

The funeral at Westminster Abbey will begin at 11 a.m. London time. Visit The Times’s website for more coverage throughout that day. In Canada, CBC said it would livestream the funeral.

Will there be a public holiday in Canada on Monday?

“For most Canadians, she was the only monarch we ever knew and many of us felt a deep affection and appreciation for her dedication to Canada,” Prime Minister Justin Trudeau said in a statement. He declared Monday a national day of mourning in Canada, after similar moves by Australia and New Zealand.

The burial ground for Black Loyalists in Birchtown, Nova Scotia.Credit…Carolina Andrade for The New York Times

Vjosa Isai is a news assistant for The New York Times in Canada. Follow her on Twitter at @lavjosa.

How are we doing?
We’re eager to hear your thoughts about this newsletter and events in Canada in general. Please send them to nytcanada@nytimes.com.

Like this email?
Forward it to your friends, and let them know they can sign up here.

Their Sport is on the Verge of Extinction. These Runners Wont Give it Up.

When Your Dog Is a Teenager