The missiles were launched from the Sunan District of Pyongyang, the capital of North Korea, and fell into waters off the east coast, the South Korean military said. North Korea has often conducted missile tests from Sunan, the district where Pyongyang International Airport is located.

The country has conducted four missile tests since Sunday, launching a total of seven short-range ballistic missiles. The tests have been seen largely as a response to joint military drills by the United States and its allies in the region.

The navies of South Korea and the United States, including the American aircraft carrier Ronald Reagan, conducted joint exercises off the east coast of the Korean Peninsula from Monday through Thursday. On Friday, the Japanese navy joined them for a trilateral drill to demonstrate their combined ability to detect and track enemy submarines, amid signs that North Korea might be preparing to launch a new submarine it has been building for years and to test its submarine-launched ballistic missiles.

It was the first trilateral drill of its kind since 2017.

South Korea and the United States have conducted annual joint military drills for decades. They were canceled or scaled down under former President Donald J. Trump and former President Moon Jae-in of South Korea to add momentum to their diplomacy with the North’s leader, Kim Jong-un. But when President Biden and the new South Korean leader, Yoon Suk Yeol, ​met in May, they ​agreed to reinvigorate the ​exercises to counter North Korea’s growing nuclear and missile threat.

More on the Relations Between Asia and the U.S.

Because of deep-rooted anti-Japanese sentiment among its people, South Korea has been wary of conducting joint military exercises with Japan, even though Washington wants Seoul and Tokyo to cooperate more closely to help deter North Korea. But under Mr. Yoon, South Korea has be​come more open to such cooperation. In August, the three nations conducted a joint missile warning and a ballistic missile search and tracking exercise off Hawaii, also a first since 2017.

North Korea accuses the United States and its allies of conducting such drills to prepare for an invasion; Washington and its allies call their exercises purely defensive​.

North Korea has conducted 22 missile tests this year so far, more than any other year. Officials from both the United States and South Korea have warned for weeks that​ the country could ​also ​restart tests at the Punggye-ri ​underground nuclear ​testing site in the northeast of the country. ​In recent weeks, they have also detected increased activity at Sinpo on the east coast, where North Korea has been testing submarine-launched ballistic missiles since 2015.

Such missiles are one of a series of new ​weapons Mr. Kim has ordered ​the North Korean military to develop, as he has vowed to increase hi​s​ nuclear and missile capabilities “at the fastest possible speed.”

The North Korean missile launch on Saturday came hours before South Korea was scheduled to mark its Armed Forces Day with a ceremony that is expected to include a speech by Mr. Yoon.

“Despite North Korea’s internal weaknesses and international isolation, it is rapidly modernizing weapons and taking advantage of a world divided by U.S.-China rivalry and Russia’s annexation of more Ukrainian territory,” said Leif-Eric Easley, a professor of international studies at Ewha Womans University in Seoul. “The Kim regime is also playing hardball with the Yoon administration while South Korean politics are hobbled by infighting.” 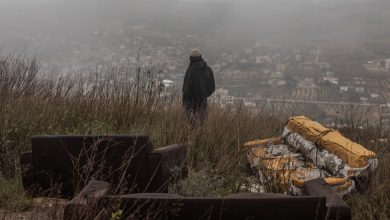