FLEMING-NEON, Ky. — This sliver of land wedged between the thick woods and Wright Fork creek has been the home of Gary Moore’s family for as long as there has been a United States. The burial plot for an ancestor who fought in the Revolutionary War, he said, is a mile away. Mr. Moore himself lives in a mobile home across from his father’s house; the house where his grandmother lived is next door.

All of that was wrecked in last week’s flooding.

“This is kind of like the final straw,” Mr. Moore, 50, said as he looked out at a new terrain of shredded homes, crushed cars and endless debris. “We’re gradually losing it — that bond we had. It’s slipping away. People are getting out of here, trying to get better jobs and live better lives. I’m leaning in that direction myself.”

For much of the last century, the country was powered by the labor of coal miners underneath the hills and mountains of southeastern Kentucky. But the landscape that was built to serve this work was fragile, leaving the people here extraordinarily vulnerable, especially after the coal industry shuttered so many of the mines and moved on. What remained were modest, unprotected homes and decaying infrastructure, and a land that itself, in many places, had been shorn of its natural defenses.

Last week, when a deluge of rain poured into the hollows, turning creeks into roaring rivers, overwhelming old flood records, killing at least 37 people and destroying countless homes, that vulnerability was made brutally manifest.

“When you have a century of billions of dollars and resources leaving, very little of it staying to create the infrastructure necessary for people to live lives, and it’s neglected as long as it has been,” said Wes Addington, a lawyer in nearby Whitesburg, whose law office is now a flooded wreck, “when that’s combined with a really insane flood, it’s a catastrophe.”

Southeastern Kentucky, which includes some of the poorest counties in the country, is different from many other rural areas, which have populated county seats surrounded by mostly empty countryside. Here, tiny communities are scattered all over the mountains, little clusters of shotgun houses and mobile homes lining creeks and hollows for miles. Many of these were once coal company camps, said Mr. Addington, who grew up in one. They were built for miners a hundred years ago, and often named — like the Fleming in Fleming-Neon — for coal company executives.

Work in the mines was always grueling, but in the heyday of coal, it made for a glittering strand of little mountain boom towns. Fleming-Neon was once one, full of restaurants and stores, a movie theater and an Oldsmobile dealership.

“When I was in high school, we had businesses up and down through here,” Mr. Moore recalled, gesturing atstorefronts that had been sitting gloomily empty well before the waters came through.

In Letcher County, where Fleming-Neon is, the number of people working in the mines is down about 95 percent from what it was in 1990; the county itself, now with 21,000 people, has shrunk by about a fifth since then.

The departure of coal companies left a population dispersed in small communities throughout the mountains, stretching water lines, roads and other vital infrastructure delicately thin. With the gradual disappearance of coal came a dramatic reduction in tax revenue, leaving much of this infrastructure crumbling long before the flood. For a population that is older, poorer and in worse health than much of the country, and thus heavily reliant on social and health services, this had already been a crisis.

“This is kind of like the final straw,” said Gary Moore, 50, whose home in Fleming-Neon was wrecked in last week’s flooding.Credit…Jon Cherry for The New York Times
The gradual disappearance of coal mining in Letcher County, Ky., brought a dramatic reduction in tax revenue, leaving much of its infrastructure crumbling long before the flood.Credit…Jon Cherry for The New York Times

Many former miners, their bodies and lungs broken and poisoned from years of arduous work underground, were never able to find another dependable line of work; fewer than half of the adults in Letcher County are in the labor force, and more than a quarter of people under 65 report having a disability. The median household income is about half of the national. The median home valueis just $54,700.

“It’s hard, it’s really hard,” said Kathy Arnett, 40, who was raised in a hollow not far from Fleming-Neon. “They just don’t make no effort to put nothing in here to help our families.”

Ms. Arnett spoke about the difficulty finding much of anything around here, most of all a good job. It was poisonous to the young, she said, the sense of futility that can set in.

“I hold our presidents — not one, all of them — responsible,” she said. “They should have been trying sooner.”

Government oversight meant to ensure the safety of homes is weaker here than in other parts of the country. In much of Kentucky, there is no enforcement mechanism for building codes for single-family homes, said Corey Roblee, vice president for government relations at the International Code Council, a group that oversees the development of building standards. Those codes are meant to protect structures against threats like flooding. Letcher County, as well as some of the other counties hit hardest by the flooding, has no local building inspector at all, according to state records.

Still, building codes apply primarily to new construction, and there is not much of that these days. In 2021, not a single building permit was issued in the county, census data show. Of the 10,500 homes that were in Letcher County on the eve of the flood, fewer than 120 had flood insurance, according to FEMA records. In the city of Fleming-Neon, only one property did.

When last week’s storms arrived, they rolled into a mountainous topography “exceptionally susceptible to heavy rain events,” said Matthew Eby, chief executive officer of the First Street Foundation, a New York-based group that maps flood risks. According to First Street’s data, two-thirds of the homes in Letcher County face a high risk of flooding, as does most of the county’s critical infrastructure, such as fire stations and schools.

And as temperatures rise over time, a consequence of the burning of coal dug out of these very mountains, warmer air is able to hold more moisture, making it possible for more rain to fall more quickly.

The land itself has changed over the decades, too, as coal companies stripped away hillsides or blew the tops off mountains to get at the riches underneath. Researchers have found that the treeless land that is left behind, if not carefully restored, can increase the speed and volume of rain runoff, worsening floods in the mountains.

“Ten, twelve years ago most of my practice was representing flood victims below unreclaimed strip mines,” said Ned Pillersdorf, a lawyer in nearby Floyd County, which was also hard hit in the floods. It was hard to say at this point precisely how much that played a part in last week’s flooding, he said. But he added: “Fly over here and see how many unreclaimed strip-mines are still out there.”

This week, the people in the region were working long, exhausting days, clearing debris with backhoes, cooking meals for one another, handing out jugs of water, building makeshift bridges and offering shelter to newly homeless neighbors.

But the work ahead was almost unfathomably daunting. Across the region, little communities remained isolated on the other side of washed-out bridges, thousands were enduring a boiling summer heat without electricity and thousands more were cut off from water. Emergency responders were still searching the wreckage in the remote valleys, as officials warned that an already grim death toll was likely to rise.

Zach Weinberg lives a few hundred yards from a family who lost four children to the floodwaters. In recent days, he has been traveling from home to home in Knott County to replace flood-damaged gas meters for his family-run business. Some customers have told him not to bother, he said. They are not coming back.

More people will probably be making this decision when they realize how long and arduous the recovery will be, Mr. Weinberg said. And when they go, they will take tax revenue with them, leaving cash-strapped local governments with even less.

“It’ll be a partial government that does what they can, which won’t be much,” Mr. Weinberg said.

There are people and groups throughout the mountains — like Appalshop, the arts and cultural organization in Whitesburg that was badly damaged in the floods — that have been working for years to remake eastern Kentucky into a flourishing region that is no longer dependent on coal mines. The Kentucky governor, Andy Beshear, is already talking with lawmakers about a substantial flood relief package, and the FEMA administrator has pledged to assist in the recovery “as long as you need us.”

But unless Congress provides additional money for people to rebuild or replace their homes — a process that can take years, if it happens at all — many flood victims will have to rely on savings, charity or whatever other help they can find. And many are asking how much there is left to preserve.

On Tuesday, Bill Rose, 64, was slowly shoveling away the mounds of mud outside the mechanic shop in Fleming-Neon where he and his brother like to tinker on old cars. Like so many others, he talked about the resilience people must have to live here. He said he was committed to staying.

But he made clear he was talking about himself. Not his children.

He was grateful when his daughter left for work as a nurse closer to Louisville, Ky. She loved it here but there was nothing for her — no jobs, no opportunities, nothing to do. After the cataclysm of last week, there was even less.

“My generation,” Mr. Rose said, “will probably be the last generation.”

G.O.P. Governors Cause Havoc by Busing Migrants to East Coast 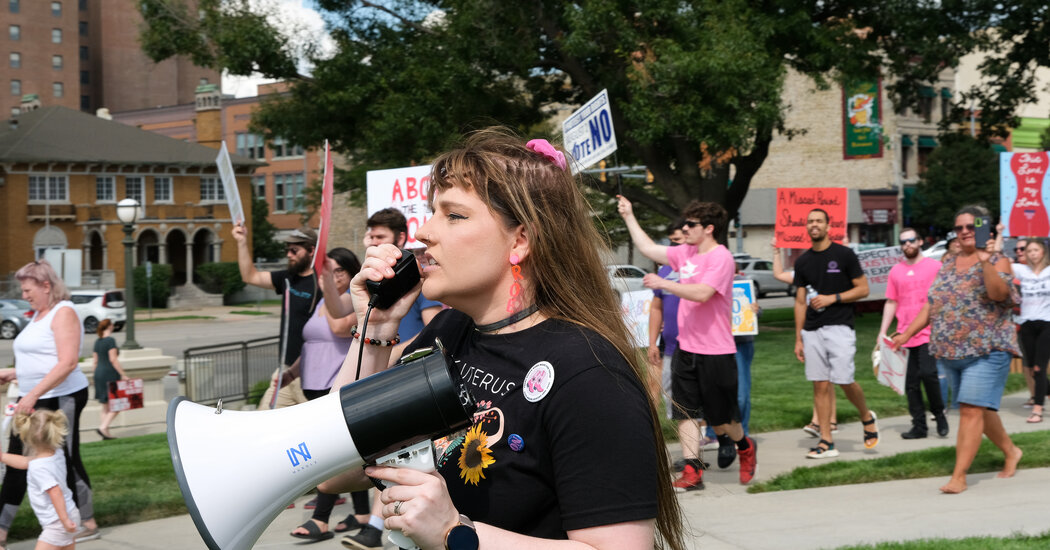 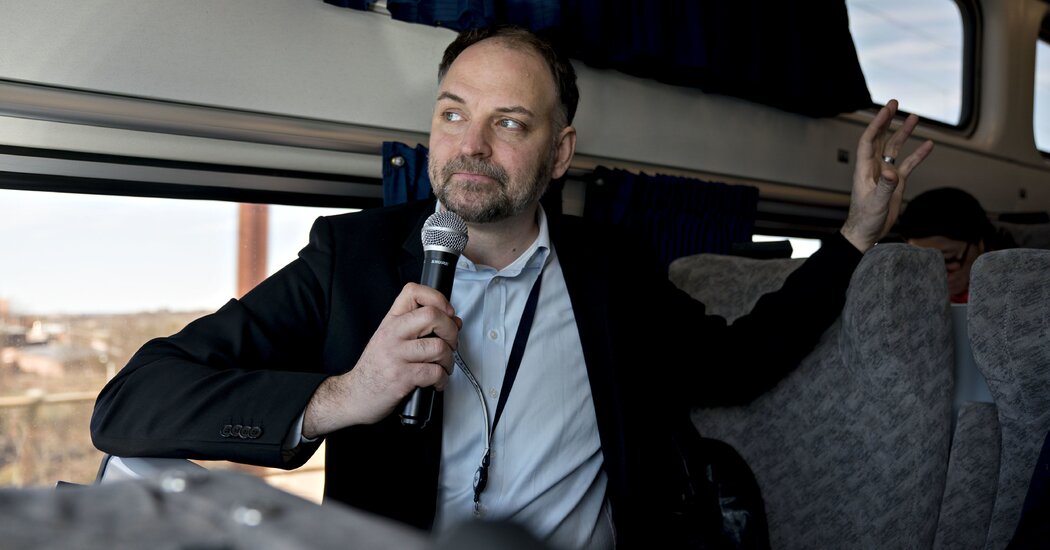 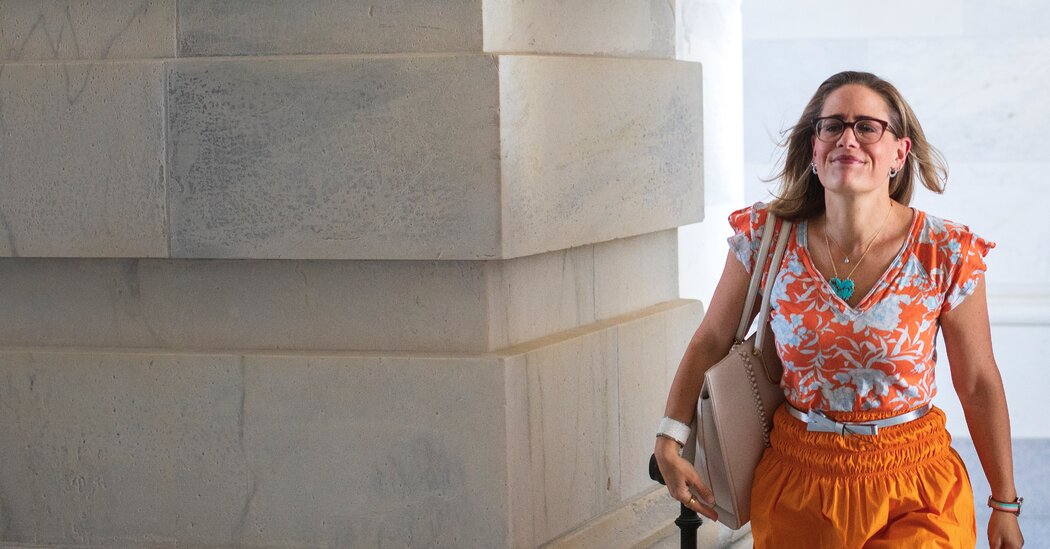 Sinema Agrees to Climate and Tax Deal, Clearing the Way for Votes 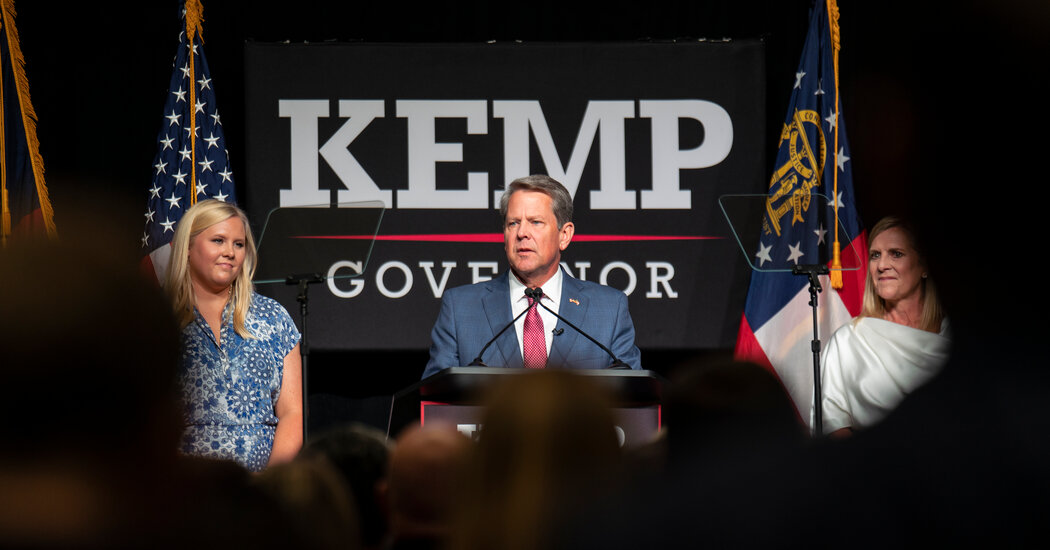