Edward Hernandez sat on a bench in a Lower Manhattan courthouse, waiting for his case to be called.

It was the end of September, and he had been charged with identity theft and stealing a credit card. For months, Mr. Hernandez, who had served in the U.S. Army, had been trying get into Veterans Treatment Court — a little known program that helps former military personnel who struggle with mental illness, addiction or both.

Mr. Hernandez, 59, used heroin for most of the past 35 years. He had been clean since he overdosed in the spring of 2021, when he had stents and a pacemaker put in to keep his heart beating.

He had already appeared before the judge in August, two weeks after his father died. On that day, he had arrived five hours early because he did not want to miss the proceeding. He had worried that the stress of his father’s death would test his ability to stay clean.

He had managed it, so far. Now, back in the courtroom, he made the sign of the cross.

New York State has 34 Veterans Treatment Courts, including the one in Manhattan. For defendants like Mr. Hernandez, admittance can mean tailored care in lieu of prison time. They can receive counseling and help finding a job and a place to live. Some are able to mend relationships that had long been broken.

But even at a time when veterans are in real need of support, the cost and effectiveness of such courts are difficult to determine. The court in Manhattan faces challenges similar to those of the roughly 600 veterans courts nationwide: Caseloads are usually small, getting in can take months and data on how many veterans are readily identified and referred to these programs and how many succeed in staying employed and out of trouble is woefully incomplete, according to an August report from the Council on Criminal Justice.

Veterans who served after the Sept. 11, 2001, attacks may be especially vulnerable to offending because they are twice as likely to have seen combat and have higher rates of post-traumatic stress disorder. But it is unclear how many of the roughly 19 million veterans in the United States have entered the criminal justice system, the report said. And data on the youngest veterans is insufficient.

New York City officials have cited anecdotal evidence that the courts do work, and have encouraged the expansion of their programming. But gauging their impact across the five boroughs is difficult, said Bianca Vitale, a senior policy analyst at the city’s Department of Veterans’ Services.

Ms. Vitale spoke at a Dec. 13 hearing where City Council members discussed how to support the state-run courts. It was the first such meeting in seven years. She said “a huge problem here is that there are not a lot of public reports” to assess the courts, and “unless we have an evaluation of the programs, we can’t identify the needs.”

Under the former Manhattan district attorney, Cyrus R. Vance Jr., prosecutors said they screened around 200 defendants for admittance from 2017 through 2021, according to a report that the office released in December 2021. Of those, 65 participated. The report does not explain whether the remaining 135 defendants opted out of the program, or if they were turned away by the district attorney or by the judge.

Between last January, when Alvin L. Bragg took over as district attorney, and September, the office agreed to send eight defendants for the court’s consideration, said Doug Cohen, a spokesman. Three decided to take part.

But the district attorney could not say how many defendants it considered for the program, nor could it speak to how the office, under Mr. Vance, came up with the 2021 statistics.

“The office has not historically tracked referrals to Veterans Treatment Court in a systematic manner,” Mr. Cohen said. He added that the office is working to increase the number of referrals to specialized courts and to improve data collection on such programs.

Even so, the courts can offer the prospect of a lifeline for those like Mr. Hernandez.

Born on the Lower East Side, he and his three eldest siblings were raised by Catholic nuns after their mother died until their father, who had given them up for adoption, remarried and brought them back home. Mr. Hernandez said his parents were loving but strict. In 1982, at age 18, he joined the U.S. Army, military records show. He was sent to Fort Jackson, S.C., and later transferred to the Redstone Arsenal in Huntsville, Ala. 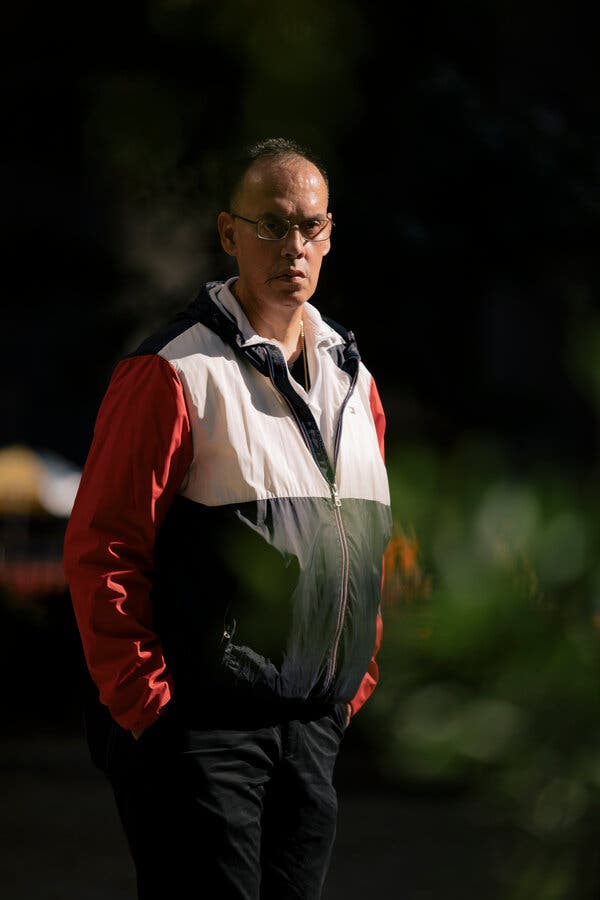 Heroin nearly killed Edward Hernandez, with his heart slowing to 34 beats a minute.Credit…Jose A. Alvarado Jr. for The New York Times

It was there that he landed in trouble. He experimented with drugs and helped another soldier steal items from the barracks, he said. He was court-martialed in 1983, then discharged the following year, records show.

Within a week of his return to New York City, he met a woman who became his wife and the mother of his two children. Soon after, he wound up dealing cocaine and eventually began using heroin. “That’s when I married the streets,” Mr. Hernandez said.

He cycled in and out of prison over three decades, convicted of forgery and stealing and selling drugs, which he said he committed to support his heroin habit. Then, while out on parole last year, Mr. Hernandez overdosed at Samaritan Daytop Village, an outpatient facility in Queens for people with substance abuse or mental health issues. A nurse checked his pulse. He said shooting up caused his heart rate to slow to a deadly 34 beats per minute.

He was rushed to a hospital, where he had his first of two heart surgeries. After nearly four decades of using, he wanted to quit. “I want to be able to call my kids, hold down a job,” he said. “I want to be somebody. I want to be the person my mom and dad always wanted me to be.”

To get defendants into the Manhattan veterans court, defense lawyers often refer candidates to prosecutors, who then decide whether to bring them before a judge. Defendants must show proof they are veterans — getting military records can slow the process, Mr. Cohen said — and they must be charged with a felony. They must also plead guilty, though the charges are often dismissed once they complete the program.

Herbert Sweat, who mentors veterans, spoke about the effectiveness of the specialized court for veterans at a recent New York City Council hearing.Credit…Johnny Milano for The New York Times

July 6 of this year was the first time Mr. Hernandez went before Judge Juan Merchan, who presides over veterans court in Manhattan and has the final say on who is admitted.

Judge Merchan took over the court in 2019. At first he was concerned about connecting with defendants — he is not a veteran — but he made a point to learn more about the military. He said the mood of this court differs from most criminal trials he oversees, including the recent case against the Trump Organization. Defendants are invited to speak directly to the judge, and they often describe the atmosphere as welcoming.

When Judge Merchan must talk privately with the attorneys, he wants to put defendants at ease.

“If I was sitting at the defense table and I saw all of these people talking about me, it would make me feel uncomfortable,” he said during a recent interview. “So I always tell them, ‘Sorry about the whispering. They’re letting me know a little more about you and now I feel like I do.’

He added, “I want to know more about them. Are they married? Do they have children? Where do they live? Have they received treatment in the past? Knowing all of these factors will contribute to their success.”

The full cost of the courts in New York State is difficult to discern, and therefore, so is the cost of potentially expanding them. Money comes from various parts of the state court budget, but it does not say exactly how much is allocated to each veterans court, said Lucian Chalfen, a spokesman for the courts. Various federal agencies also contribute.

There is no pay for the program’s peer mentors like Herbert Sweat, a Vietnam War veteran who fought in the Tet offensive in 1968 as a part of the Army’s 173rd Airborne Brigade. He has mentored other veterans for about 25 years, eight of those in veterans courts.

Mr. Sweat drives from Garden City in Long Island every Wednesday to attend veterans court in Manhattan, which is held once a week for about 90 minutes. When defendants go before the judge, he stands near them and jots down information about each case in a composition notebook. He always wears a bolo tie to court, a nod to his Shinnecock heritage.

Herbert Sweat, a disabled veteran, volunteers as a mentor to veterans in the specialized court program.Credit…Johnny Milano for The New York Times

Many of those he mentors struggle even after they enter the program: In July, a man with thin white hair and thick black glasses admitted he had used cocaine again and hung his head as he shuffled out of the courtroom. Another defendant told the judge he was depressed and, at times, unmotivated.

Mr. Sweat, who was in the courtroom, looked up at the second defendant. “He was there for us, at one time in his life,” Mr. Sweat said. “We all make mistakes, so I’ve got to be there for them.”

Two months later, Mr. Sweat sat on the court bench behind Mr. Hernandez as they waited for his case to be called. Mr. Hernandez glanced at his phone and saw a text from his brother, Richie Hernandez. It said: “Bro, you should be good.”

Then, just before 3 p.m., Judge Merchan asked him to come forward.

Mr. Hernandez waited at the defense table as Judge Merchan scanned the paperwork. Within five minutes, the judge smiled at Mr. Hernandez. He told him he was accepted.

Mr. Hernandez returned to his seat, and wept. “This is the best news I’ve ever received in my life,” he said.

He turned to Mr. Sweat, who gave him a fist bump and a pat on the shoulder as they stood and left the courtroom.

Tags
About Program Said Who With

‘Suddenly, It Appeared as Though the Bus Was Going to Be Able to Move’