“Right now you’re dancing on top of or ahead of the music,” Justin Peck told members of New York City Ballet during a recent rehearsal. As the pianist Craig Baldwin played the gently accumulating “Simple Gifts” section of Aaron Copland’s “Appalachian Spring,” Peck added: “Here, you should be riding the wave of the music. It’s like surfing on a longboard.”

It wasn’t the only time Peck, City Ballet’s resident choreographer, spoke in metaphors while preparing “Copland Dance Episodes,” which premieres on Thursday at the David H. Koch Theater at Lincoln Center. And it wasn’t the only time he encouraged dancers to match the plain-spoken spareness of the music. “It has to have the ease,” he said at one point, “of a tumbleweed blowing.” 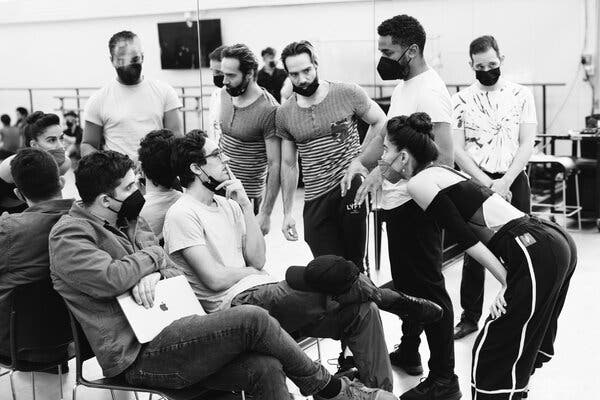 These dancers are somewhat familiar with Copland; Peck’s exhilaratingly athletic “Rodeo: Four Dance Episodes,” from 2015, is one of his most beloved ballets. Yet the premiere on Thursday — an evening-length whirlwind that includes a version of his “Rodeo” but is also set to “Fanfare for the Common Man,” “Appalachian Spring” and “Billy the Kid” — will be a milestone on multiple fronts.

To start, “Copland Dance Episodes” will be the company’s first evening-length, plotless work since George Balanchine’s “Jewels,” from 1967, and the first evening-length one for Peck, period; above all, for the artists involved, it will be the first time Copland’s three ballet scores, among the finest American music written in the genre, will be under City Ballet’s roof.

“One of the things I noticed early on when I was making work at New York City Ballet is that there’s no Copland in the rep here,” Peck said in an interview. “That just felt like such a weird thing for this incredible American institution.”

For his part, Andrew Litton, City Ballet’s music director, thrilled to be taking up the Copland scores. “It’s been an omission,” he said. “The saying was that he invented the sound of American music. He certainly invented the sound of the West, which has been copied by hundreds of film composers since.”

Peck referred to Copland’s ballet output as “music that we all don’t realize we know, but we know”: the breakneck “Hoe-Down” from “Rodeo,” the symphonic elevation of “Simple Gifts” in “Appalachian Spring.”

Peck demonstrates a move for his dancers. “It has to have the ease,” he said at one point in rehearsals, “of a tumbleweed blowing.”
Jonathan Fahoury.

“There’s a lot that can be culturally associated with it, especially the Western cowboy feel of it, which I’m not leaning into at all,” Peck added. “I was a little nervous about that at first, but had to sort of remind myself that this music was written by this Jewish gay guy from Brooklyn who had never been out West.”

Several years before creating “Rodeo,” Peck saw Agnes de Mille’s original choreography at American Ballet Theater. He sat close to the orchestra, and although he enjoyed the dance, he was more struck by the score. “I could really feel it in a physical sense, rather than just using my ears and hearing it,” he said. “I kept thinking about the music, and then eventually, I had this thought that maybe there’s room for another interpretation.”

Where de Mille’s dance is theatrical, Peck’s “Rodeo” is abstract, stripped down to a neutral scenic design and placeless costumes. In a playful turn, it’s also pronounced “ROH-dee-oh” instead of the traditional “roh-DAY-oh.” Jonathan Fahoury, a member of the corps de ballet said that Peck’s ballet is one of his favorites to perform, adding that it’s free of affect or ornament: “What you see is what you get.”

“Rodeo,” Fahoury also said, is like a single idea that has now been expanded for “Copland Dance Episodes.” Peck used a similar comparison: “Making it was like making a pilot episode. That was proof of concept, and now what’s the rest of the season like? How do we take these character arcs even further through this abstract space, then tie it all up?”

The works Peck is using, composed between 1938 and 1944, have had a standard-setting effect on American sound, with the incorporation of cowboy songs and folk music. And they exemplify what has been seen as a national style of straightforward modesty. Transparent and uncomplicated by dense counterpoint, Copland’s music from this time all but defies interpretation, and punishingly exposes players who deviate from its directions; the composer Ned Rorem once described it as having “never a note too many.”

Onstage, the story ballets were distinct: “Billy the Kid” was written at the urging of Lincoln Kirstein for Ballet Caravan, a precursor to City Ballet; “Rodeo,” for de Mille; and “Appalachian Spring,” for Martha Graham. Yet they are, Peck said, “cut from the same cloth.”

That’s an argument borne out in the juxtapositions of “Copland Dance Episodes.” The opening “Fanfare” — as simple as can be, in the key of C and in common time — leads without friction into the brassy “Buckaroo Holiday” of “Rodeo,” which is in the same key, with the same number of beats per measure. Copland’s signature expansiveness, rendered with fifth intervals, opens the “Saturday Night Waltz” and returns later in “Billy the Kid.” And “Hoe-Down” ends with three emphatic sforzando notes that flow without a pause in Peck’s dance into three soft ones, in a logical key change, at the start of “Appalachian Spring.”

Throughout, Litton said, the music remains at a “human” scale. That word has also often been applied to Peck’s choreography, particularly for groups. Another word that tends to come up when speaking with his City Ballet colleagues is “musical.”

Litton described Peck’s relationship with the scores as “emotion based,” clearly responding to the notes with choreography that “always fits.” And Ellen Warren, a former dancer with the company who is designing the costumes for “Copland Dance Episodes,” said that seeing Peck at work “almost feels like a game between the movement and the music.”

Peck grew up playing piano, and continued with it while at the School of American Ballet. There, he took part in a music program led by Jeffrey Middleton. Eventually, Peck, who had long believed that dancers are musicians — especially tap dancers like Savion Glover — could interpret a score with confidence, and write piano works for himself.

“Copland Dance Episodes” has been in development since soon after “Rodeo” premiered. After studying the scores and responding to them with movement, Peck mapped out the choreography as if it were a series. He said that the process of building it was closer to his work on Steven Spielberg’s “West Side Story” film than to his other ballets.

“What I’m aiming to do is to get the viewer to break down the idea of, this is like a trilogy of some sort,” he said. “It’s not a trilogy. It’s sort of taking liberty by colliding all this music and immersing ourselves in the spell of it, and finding these pockets of interaction or of little anecdotes or of pure dance so that they can find the world of it in a new way.”

The dancers in rehearsal. “It’s not a trilogy,” Peck said of “Copland Dance Episodes.” “It’s sort of taking liberty by colliding all this music and immersing ourselves in the spell of it.”

Miriam Miller, a City Ballet soloist, said “Copland Dance Episodes” is “a nonnarrative ballet, but there are emotions and narrative within it.” There are couples who recur throughout, but the work, after the “Fanfare” introduction, begins with a version of Peck’s “Rodeo,” which was made for an ensemble of 15 male dancers (and one woman); and then, in “Appalachian Spring,” the casting is inverted, with a group of 15 female dancers on pointe. Near the end of that section, Peck said, the groups are combined “almost like peanut butter and jelly, then the third act, ‘Billy the Kid,’ brings these two worlds together and collides them.”

This work is Peck’s 30th premiere with the lighting designer Brandon Stirling Baker, who said that in creating a scheme, he began with the music. “I listen for color,” he said. “And Aaron Copland is the most colorful composer you can think of. It can be many things — rowdy, epic, sensitive, serene.”

Ultimately, he and Peck decided that the color should come from the score and the dancers, not from the light. “It’s going to all be light that we see in the real world,” Baker said. “It’s very honest, and the work can speak for itself. I thought about ‘Simple Gifts’: ‘’Tis a gift to be simple.’”

Peck, left, with Aaron Sanz, said that the process of building “Copland Dance Episodes” was closer to his work on Steven Spielberg’s “West Side Story” film than to his other ballets.

Much tone comes as well from the set, by the artist Jeffrey Gibson, whose work Peck saw in his exhibition “Like a Hammer” at the Denver Art Museum in 2018. Gibson’s style, which incorporates craft and camp in mixed media, with inspiration from his Choctaw and Cherokee heritage, is as fervently American as Copland’s music.

“For me, listening to the music was a little complicated,” Gibson said. “It is Americana from a time of strife for Native American people.” But he and Peck also wanted their collaboration to put forward a vision for unity. Gibson arrived at a dizzyingly colorful curtain with text running along both sides that reads “the only way out is through” — “a set of words that expressed what a new Americana could be,” he said.

The curtain’s look fed that of the costumes. Warren took the more than 100 colors of Gibson’s design and assigned two to each of the 30 dancers in the cast. During “Fanfare,” they are covered in white nylon tulle that Peck described as “the cobwebs of ballet’s past.”

“He wants people to see the music in a new way,” Warren said. “They hear ‘Copland’ and they think Western. But the visuals are about dealing with the music in a way that’s truly rooted in America and our culture. All these colors are redefining what it means to be American.”

Tags
Dance Music That Was With

Restaurant Review: Masalawala & Sons, Where the Food Is Bengali and the Mustard Oil Flows

‘Extraordinary’ Review: The Power of Powerlessness